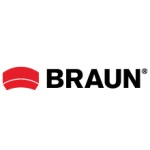 Founded in 1915 as Karl Braun KG, factory for optical devices and metal goods, the company manufactured binoculars and semi-finished products, also for the radio industry. After World War II and the currency reform in 1948, the Karl Braun KG company became the Carl Braun Camera factory in Nuremberg.

It all started with box cameras from the Imperial and Ideal brands. followed by the models Norca, Pax and Paxina 6 x 6. In 1950 the production of the extraordinarily successful 35mm cameras of the Paxette brand began. The program ranged from viewfinder cameras with and without interchangeable lenses to single-lens reflex cameras.

In addition to the high-quality Paximat Multimag models, the inexpensive slide projectors from the Novamat series have also established themselves on the market. Above all, the Novamat devices with built-in daylight screens are extremely popular.

In addition to the successful introduction of Braun digital cameras and digital accessories, the Braun Multimag SlideScan 3600 has caused a stir in the market since mid-2003. This scanner was developed on the basis of the Paximat Multimag slide projectors and, for the first time, enables slides to be scanned directly from six different slide magazines. The Braun Multimag SlideScan slide magazine scanner thus bridged the gap between conventional slide photography and the digital medium, which became an important mainstay for the company in the future. The successor model Braun Multimag SlideScan 4000 followed in March 2005 and in 2012 the Braun Multimag SlideScan 6000, consistent further developments now with even higher resolution, digital ICE technology or Magic Touch dust and scratch removal, as well as a higher scanning speed.
In 2004 the company changed its name to BRAUN Photo Technik GmbH, moved into new premises in Nuremberg and from that point on began to expand its range as a full-service provider in the multimedia sector. In 2006, the success story around the topic of digital picture frames started, which continues to this day and is an example of the long-term product cycles at BRAUN. From 2007, the BRAUN binoculars made a very successful return to the diverse product range and enjoy unbroken popularity. Early on, BRAUN was one of the first to offer a trendy action cam with an underwater housing for a broad group of buyers. The first model was placed on the market in 2010, with the portfolio of action cams being constantly updated to this day.

2016 saw the move to a newly completed performance center in Baden-Württemberg.